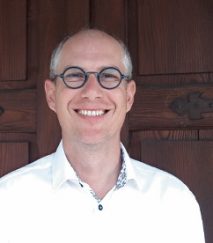 Gilles Cavin
“The dynamism of a small bilingual church in the diaspora.”

A religious minority comprised by a little more than 20,000 faithful, the Evangelical Reformed Church of Valais ERCV has been officially recognized as a public-law organization since 1991, in the same way as the Roman Catholic Church, with which not only a fruitful but also a vital collaboration is maintained in many fields. Spread over ten parishes, of which around one-third are German-speaking, and served by 15 ministers, pastors and deacons, the ERCV is led by a Synod and Synodal Council, alternately chaired by a minister and a layperson.
The ERCV actively participates in the education of ministers by welcoming trainee pastors and deacons. While Protestants commemorated the 500th anniversary of the Reformation in 2017, the ERCV is celebrating the 70th anniversary of its founding in 2019.